Just in case anyone doesn't know it,we'll first define a false flag: “covert operations designed to deceive the public in such a way that the operations appear as though they are being carried out by other entities.”


“The name is derived from the military concept of flying false colors; that is: flying the flag of a country other than one’s own. False flag operations are not limited to war and counter-insurgency operations and can be used during peace-time.”

Incidents are invented,drama is scripted and the media is coopted to write and insert false narratives in the public consciousness  all to justify responses to "terror and aggression."
In December 2009 Umar Farouk Mutallab,a Nigerian graduate student was arrested allegedly trying to blow up an Amsterdam-Detroit flight on Christmas day with an "underwear bomb," (who thinks up this adolescent shit!). Immediately after his arrest the case revealed laughable inconsistencies:
-he had a US visa but no passport
-a mysterious Indian helped him board
-didn't check any luggage
-the explosive was so weak it wouldn't even have hurt him much less the aircraft fuselage.

Due to his so-called Al Qaeda connections via Yemen,Washington at this time increased their secret specop/drone war over there and more importantly inserted Nigeria into the wider fabric of the Global War on Terror-which in retrospect seems to have been a major goal of this particular episode .
Umar Farouk Mutallab just like the recent Woolwich "terrorists" had long standing links with Brit intel and was a patsy. He was prez of the Islamic association at the University College London where he studied mechanical engineering-such a position would obviously bring him to the attention of the myriad agents,agent provocateurs and informers official and freelance who make their living profiting from the normal angst in such people's lives.
Umar,who was sentenced to life last year after he confessed,(bullshit!brainwashing can get anyone to admit to anything) and will suffer the the most unfortunate moniker of forever being known as the "Underwear Bomber" got a not so surprising supporter from a fellow passenger,a trained lawyer,whose midlife epiphany is worth reading.


His comments are crucial,especially for those still caught up in false narratives of Al Qaeda: For one month the government refused to admit the existence of the man in the tan suit before changing course and admitting his existence in an ABC News article on January 22, 2010. That was the last time the government talked about this man. The video that would prove the truth of my account has never been released. I continue to be emotional[,] upset that the video has not been released. The Dutch police, meanwhile … also confirmed that Umar did not show his passport in Amsterdam which also meant that he didn’t go through security as both are in the same line in Amsterdam. It upsets me that the government refuses to admit this fact.........In closing I will just say that regardless of how the media and government try to shape the public perception of this case, I am convinced that Umar was given an intentionally defective bomb by a U.S. Government agent

Its traumatic to discover you're deepest beliefs about your own government and the way the world works are nothing but child's fantasy like Santa Claus. Kudos to the witness, Mr. Kurt Haskell for remaining true to his core humanity and we must understand his feelings when he declares  The effect this matter has had on my life has been astounding and due to this case, I will never trust the government in any matter, ever.

Can a human body do ALL that? With first hand experience of many years in a high accident rate country called Kenya-hell no!

There should be blood  closer to the body.

This is  Mr Michael Olemindis Ndemolajo,alleged to be the same Michael Adebolajo after his arrest.Who is he really? He made weird allegations of sexual torture after his arrest when caught with sixl other terror suspects on a dhow en route to S Somalia suspected to be aiding the then active Al Shabab in November 2010.

It seems Brit intel got him off the hook.His family at the time complained off endless MI5 recruitment attempts. There are even more questions concerning  the entire event. Absence of blood on his clothing despite the bloody cleaver and hands,what appear to be the use of greenscan on the video with people simply photoshopped into the background afterward.
Let mes stop there;I could write thousands of words and frankly if you can't see similarities with these 2 and the fake "Underwear Bomber,"more analysis would be useless. Both Michael Adebolajo and Michael Adebowale share Christian middle class backgrounds of Nigerian origin. We all know how the Global Elites are pushing to balkanize that country via Boko Haram and this "attack" pushes Nigeria to the forefront of everyones mind. And of course ever more control over the people for the security/intel networks.


Less than a day later,  Lord Carlile, a former independent reviewer of terror laws, has said the killing should cause the Government to rethink the decision to drop the planned Communications Data Bill from the Queen's Speech, which would have extended email and internet monitoring to the security services.

Free your mind from the matrix of bullshit! In future ,Dear Reader do your own research and ignore the MSM outtakes.
Update!
More info invalidates the official story that Michael Adebolajo and Michael Adebowale as seen in the viral attack videos were a deranged couple of Islamofascists beneath the radar of intel networks. It now seems Adebolajo was an agent since at least prior to 2010 when MI5 got him or his double out of an Al Shabab court case.
His brother , Jeremiah, a lecturer in Saudi Arabia was also an agent.
Its evident this unfortunate family were the target of a longterm recruitment operation. In the movies its glamorous;in real life much less so. Extortion,blackmail and even brainwashing are used to 'encourage' those reluctant.


The document, prepared by case workers with the charity Cageprisoners, says Blessing approached the East London charity for help because she was worried about the harassment and intimidation of both her brothers by the security and intelligence services.
She says MI6 bought a ticket so Jeremiah could fly to an Intercontinental hotel in another Middle East country (believed to be the United Arab Emirates) and that he was given local currency worth more than £1,000

Early last week the Nation newspaper published front page story on Deputy Prez William Ruto's "excessive" spending on a charter jet. According to documents in their possession his office spent 100 mn Kshs,almost 1.2 mn $. However the government later clarified the 4 nation tour of Algeria,Gabon,Nigeria and Congo Republic necessitated the charter of a Bombardier 850 Challenger jet for just under 19 mn ksh,around 220,000 $.

Further,Ruto has demanded a retraction,failure to which he'll institute legal proceedings. The NMG CEO,Linus Gitahi conducted his own investigation and discovered to his shock the 'documents' proving the 'scandal' were sourced from one Jakoyo Midiwo,parliamentary deputy minority leader and rabid supporter of Raila Amolo Odinga,still smarting from his presidential election debacle.

A week prior,the Editorial Director,Joseph Odindo allowed the publication of a letter in the NMG owned daily,the Uganda Monitor detailing what turned out to be a fake plot to assassinate top military/intel leaders by those opposed to Prez Museveni's plans to have his son, Brig. Muhoozi Kainerugaba succeed him.
M7 immediately closed the Monitor as well as 2 sister radio stations,Dembe and KFM. The entire NMG brass camped in Kampala for a week fruitlessly trying to meet the infuriated prez who would only respond through intermediaries that he'd only see the main shareholder,the Aga Khan. 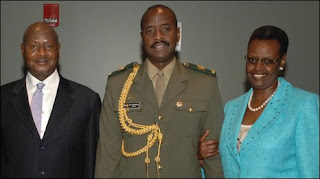 Which brings us to the main shareholder of the NMG,the Aga Khan,nominal head of the Shia sect of Ismailis,who's also a major investor in not only Kenya but the wider E Africa region with significant holdings in tourism and health sectors. The Nairobi Serena,flagship of the international Serena hotel chain.
HH,the Aga Khan is primarily a businessman having coexisted with the first prez Jomo Kenyatta,Moi,Kibaki and would definitely want to continue under Uhuru's regime. Sources say major investments are threatened as a vindictive  out of control press agenda antagonizes E Africa's main governments. Everyone at NMG,even those uninvolved in schoolyard type plots must now pay the price.

It is thought major shareholders and most likely the Aga Khan himself will soon do a major housecleaning at E Africa's largest media network,sooner rather than later.

Posted by mwaura kinuthia at 00:29 No comments: