WHO IS BENJAMIN NDOLO? UPDATE!!

Every Wednesday morning on Citizen radio at 730 one Benjamin Ndolo reels out a chronicle of national woe/failure and trauma that he would have us believe is the only Kenyan condition. According to him we're half way down the abyss and the best we can do is tighten our seat belts.
This morning he was cheerleading Kethi Kilonzo as the new presumptive Senatorial saviour of Makueni and by extension Kenya. As always his stock narratives were unquestioningly accepted by the Citizen radio djs who are more of co-hosts than serious radio journalists ,even by Kenyan standards.

To wind up he reminded everyone how he experienced racism in the US south and how during last years Rhino Charge a white neighbouring camper discharged a shotgun into the air saying,"one down.,millions more to go!" How brave! Heroically escaping a non murder attempt! Wow!
In the mid 2000s there was a Benji Ndolo, a 30 something year old dreadlocked light skinned St.Marys school Westlands alumni in Atlanta,Georgia who hit upon a genius idea. A combined private mortgage brokering and home refinancing operation. Apparently the business literally took off like a house on fire;for which he was profiled as one of the successful Kenyans in America in mid 2005.
What really happened is a tale involving promises,disappointment and outright conmanship possibly swindling. Incendiary diaspora emails from Atlanta flew thick and fast. I attached the whole series for readers to see and decide for themselves.


This is how the scam worked...a buddy from ATL who is privy to it broke it down...
...was this Benji chap a realtor?  How exactly did he swindle chaps?  One of the incidents in the article talk about him making $200K in one RE deal?  Do you know in what capacity he made that loot?  It sounds like a lot of loot for a realtor/broker, to make off one digz...unless we're talking about a very pricey one.
What Benji had going for him was a one-stop shop. After dealing with foreclosures and fixer-upper deals, I know how much of a biyatch it can be. First you need to locate a wholesaler, from whom you can buy the houses. Second, you need to get a hard money lender who can loan you the float to buy and fix the house. That's coz "legit" banks do not touch fixer-uppers. Yaani even if all your house needs is an AC unit and some sheet-rock work, the bank won't touch that. So these hard money lenders give you float but of course you pay another jacked up interest rate. So of course the deal is you quickly fix the house then refinance it with a legit bank. Third, you need to find legit contractors who will fix the house for you. Again, after dealing with some seriously punda contractors, I know how hard a job that can be. Also, lets assume you grab a pal from TTQ and show him a jacked up house and ask him how much it would cost to fix, he would honestly have no idea. It takes a while to know how much paint and such a house needs, and how much it costs. Bila that knowledge, you stand the chance of getting totally conned. Finally, once the house is fixed, you need to be able to refinance it and then market it, either for sale or for rent.
So if you're a chap who has never dealt in real estate and you wish to ingia, what I have described above is definitely a load. So what Benji did was to offer a one-stop shop - he'd get you a house from his whole-salers, get you a hard-money loan, get you contractors who'd fix the house, then help you get tenants. All for a fee of course, but it was a deal which were it legit would be a very serious deal for many investors.
I heard that in the beginning things were cool then at some time he just went crooked. Fulton County (where Atlanta is) is the Number 1 county in the nation when it comes to mortgage fraud. So the pals who were crooked there made a shit load of money. So what I heard Benji would do is he's be in cahoots with everyone from the wholesaler to the appraisers, the contractors, the hard money lenders, the mortgage brokers, etc.
He played kadhaa pals. My chile pal, like I said, lost everything she had worked for and gotten in Stato. Our other pal got a house for $280 G at a serious deal of about $220, spent like $30 fixing it, and then tried pull some float out and then re-finance it for about $270. The legit bank sent out it's appraisers who told him that the house is actually worth only $140 G. So now our pal can't rent or sell the house. He owes those banks about $250,000 for a totally non-performing asset. Sure, he can let it foreclose, but it's going to be on his credit until 2017, and since he deals a lot in buying and selling homes, that would destroy his career kabisa. Yaani totally jacked up shit. I personally know of 3 more pals, and how much they lost, plus I've heard of other pals. And these are the only ones we know about. That's why I applaud it coming out coz pals need to know about such shit.
One thing Benji had going for him is he is a very smooth talker. Plus he's the jamaa who got talked about in that Nation article that mentioned Kenyan millionaires abroad. Of course that lends serious credibility when he approaches you.  Here's the Nation article, Benji is mentioned somewhere in the middle.
http://www.nationmedia.com/dailynation/nmgcontententry.asp?category_id=31&newsid=57754


As you can see these are all people with inside knowledge many of whom lost money to the said Benji Ndolo. A year or so after these emails circulated a 3 series BMW owned by the same individual was often seen parked outside Lonrho House with a personalised licence plate,reading 'benjamins.'
For those who don't watch rap videos,this is what it means. 100$ bills with Benjamin Franklin. 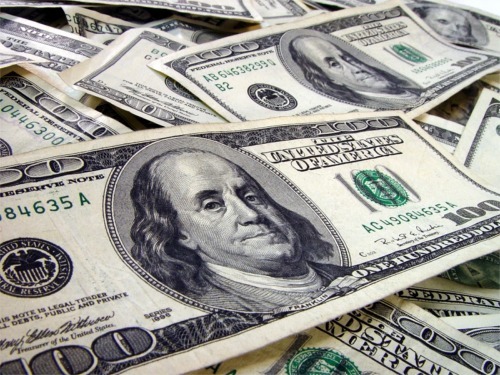 One thinks instead of posing as political analyst/cheerleader/professional heckler and final arbiter of ethical standards its time to set the record straight. Raise your hand if you agree.

After a one week hiatus,Benji's back! As usual he was entertaining with the same assertions and sweeping statements and hyper critical of our political structures. Starting off attacking those who have an "allergy to the truth,"  he unloaded cliche after cliche which must be examined since Cindy Ogana,the purported 'journalist' cohosting his 'realtalk' show on Citizen fm never bothers to interrogate his 'truths'.
Firstly we can ignore his potentially slanderous comment about those who killed Mutula Kilonzo,father of future Makueni senator Kethi Kilonzo,slated to inherit his seat. The truth is Mutula was never that important. Apart for being former prez Moi's lawyer for which he made many many millions few can point to any substantive transformative agenda tabled or implemented by the late Senator during his 5 year cabinet time in 2008-2013 or the prior 5 years when he was Mbooni MP.
What he is remembered for is his tedious defense of his client,immediately after the 2002 election in which he practically vowed to die for Moi. He morphed into an enthusiastic Kibaki basher of a near Odinga type. Oft times he was on TV mouthing identical phrases during the manufactured fake constitutional crisis talks in the early years of the Kibaki era-recall the whole Bomas mess? He would  accuse the immediate former president of ethnic favouritism,corruption and all manner of malfeasance ending with the stock "kunajisi katiba/raping the constitution," pointing at his crotch.

Trumpeting Kethi Kilonzo as the new Nelson Mandela, is a major self sabotaging move that will haunt him;(who hasn't noticed her stereotypical  Kenyan woman character?,the displaced anger,failure to understand issues,deliberate antagonising perceived enemies and a love of shooting off her mouth?). 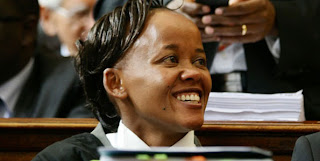 Her performance during the CORD presidential court case didn't endear her to unbiased minds;though she raised some laughs looking like a first year law student in front of the Supreme Court. Speaking of which it is now apparent this woman doesn't have a voter's card. Therefore she is ineligible to stand for election anywhere in Kenya. How exactly she was cleared by the IEBC is story they should tell us.


The most annoying narrative however is the timeworn elementary school spiel about the "ethical American foreign policy,so of course Obama couldn't visit us" sold even more energetically than a paid US state department official,leading people to ask-"what about Libya and Syria, forget Gitmo for now." 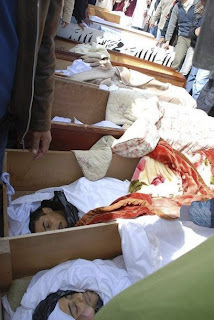 They died faster than these black Libyans. These are the 'best' photos. Others are to gruesome even for men.

Some Syrian army dead. All this happened when Obama's handlers wrote the script for the unfolding death and destruction. Both these countries have suffered immensely. Libya lost at least 30,000 civilians while the Syrian death toll is conservatively estimated at 50,000. 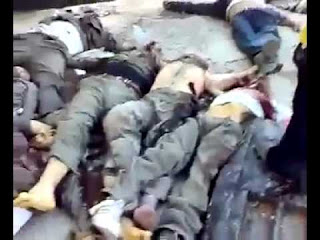 Since Mr.Ndolo seems unaware of this perhaps Cindy should ask him next time he parrots the "ethical foreign policy" line. If she knows-or cares.