MITT ROMNEY, ORGANISED CRIME AND THE RECENT MIDTERM US ELECTIONS

I originally did this piece on Mitt just before the November 2012 'presidential election.' I couldn't validate some of the financial info in time so I sat on it and decided to combine it with the results of the  recent midterm elections. It all adds up.
The world knows Mitt Romney as the Republican contender against Barry. Dear Reader,behind the narratives of a controlled (read:fake) opposition is a much darker reality;one of funneling unimaginable drug wealth,mass murder through terror groups and the seizing of resources of entire continents. The World Rapers aren't a monolith. There are cabals and cliques within those factions with one or more on the ascendancy at any one time.Mitt Romney,a Mormon has come to be called the head of the Mormon Mafia which is well represented in intel,political and banking networks.

A young Mitt with Dad and Mum

Its no surprise;after all he was only taking the well trodden path of dad,George Romney a big Republican who almost clinched his party's nomination in 68. George was always BFF with Mexican drug and human traffickers as far back as the 30's.

His son Mitt was friends with future Mexican prez Carlos Salinas in Harvard which is where the two planned a financial mafia kingdom along the lines of the Salinas family enterprises.
Salinas' career as Mexican president is another expose on its own-during his tenure he devalued the peso over 150% sparking off mass poverty not seen since the 1920's,privatised everything not not nailed down (and even what was) and is now living in Cuban exile after being named as major cocaine exporter.

Their joint business Bain capital was started in 84 and the proceeds of their drug fuelled money laundering grew meteorically. Recently one of their agents one of their agents was in S.Africa intending to but outright mines valued at 150 million $ plus-with a a total war chest of over a 100 billion $ in cash-not a typo. Romney was in Israel,the same time,mid 2012 with the top Zio Elite servitors to meet diamond dealers.
This is where Bain and Romney get dangerous for Africa:they're also in contact with UNITA wishing to buy or acquire via force using so-called guerrillas  what they can't do so legally. Bain capital and their proxies have targeted the whole of Africa and are currently active in the DRC, Mali,Chad,Nigeria through boko haram and are known to have targeted Kenya,though as of now operations are not known to have started.

What is of interest is the fact that Mormonism was nothing but a false religion started by the Rothschilds-like all belief systems it was intended to be an Elite sponsored social control mechanism. Wrap some myths around a loose philosophy,reinforce with 'religiousity' (piety,faith and fake humility) throw in some saints and you have Mormonism.

Once upon a day a man named Elohim became a god like his dad. He had many many kids including both Jesus and Lucifer. He decided to put all these kids on one planet and that the planet needed a saviour which would be either Jesus or Lucifer.

Unsurprisingly Jesus won while Lucifer acted to type and turned many kids against him for which he was banished along with his followers to earth,never to have physical bodies. The people of Jesus were white and those who remained neutral in the battle turned dark.
There's much more about gold plates,an angel named Moroni or how they migrated from Jerusalem to America in 600 bc but this thumbnail suffices.
At least that's what James Smith,the founder preached.

This may be why blacks were banned from Mormonism til the 80s but ideally we should ask the Mormons themselves,or the Church of Jesus Christ of  Latter Day Saints as they're known. Nairobians will know they're located in Upper Hill.
The cofounders,Brigham Young and Hiram Smith were Freemasons funded by the Rothschilds.They were certainly ambitious.

They intended to found a kingdom of Deseret,of course to be ruled by James Smith. 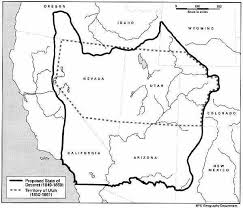 It would have encompassed Nevada,Utah,much of Kali,Arizona and parts of Oregon and Wyoming. It makes up nearly 20% of the continental US.

The public image of Mormonism is the exact opposite of reality 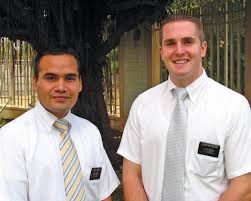 Believing all else to be Gentiles they uniformly cheat and defraud non Mormons. The cults so active in organised crime many say that's its  raison d'etre not belief in quaint doctrines of Moroni or Jesus' 3 wives.
There's a fascinating list of Mormon mass murderers, serial killers and forgers including the infamous Ted Bundy.

One polygamous clan,the Kingstons by the time of the arrest of their patriarch had a 300 mn$ empire across 3 states. A strange brew of incest,inbreeding and physical abuse was used to keep family members in line. "I could boil down what they're about in three words," says a member who broke with the Order. "Money, sex and power. They'll do what they need to do to defend what's theirs."

These guys have a heavy presence in the American security/military/inte/ networks. The middle levels of the FBI/CIA/DEA/Homeland security and the Marines/Army/Airforce/Coast Guard contain many Mormons. More worryingly the NSA's new HQ,the 4 bn $  fusion centre is presently under construction in Utah.
Hard reliable stats are difficult to find but sources say their active duty numbers  are way  beyond the national  1.5% of the national population.

The demands placed on young Mormons are more akin to a cult and point to mind control.
Young missionaries can't have sex or associate with non Mormons. Also armed executioners enforce Mormon hierarchy and doctrine. After a failed insurrection against the US in the late 1800s the mass of Mormons fled to Mexico.

Interestingly but not surprisingly given the nature of Mormonism, the family of John Hinckley the man who shot Reagan in 1981 is still one of their Elite. 2 years ago many controlled Republicans dutifully made noise about Obama's birth certificate remaining silent about Mitt's decidedly dubious origins.

In the 1880s they were actually stripped of US citizenship for polygamy-whereupon they joined their coreligionists south of the border. George returned in 1910 but it is fact that he never followed any legalities required for US citizenship. His son,Mitt may very well not be a legal citizen.

Anyway,Mitt as expected,or rather as scripted  won the Republican nomination and paraded himself as saviour and messiah against the other frontman Barry Soetoro,bka Obama. As previously scripted, the Bath house boy 'won.' It doesn't matter! Both Romney and Obama ultimately represented the same Rothschild interests.

Everything was theatre. The caucuses,debates,opinion polls and whatnot were simply to validate a predetermined outcome-as has been the case for nearly a century. 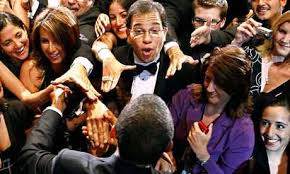 Last weeks midterm elections
revealed that while things have changed,some things have remained the same. This was the poorest outcome ever with only 38% of the electorate turning up. The causes are obvious-while Americans like everyone else are increasingly aware of the reality behind the headlines thanks to the internet this development is a reaction to a lack of real solutions offered by the sterile 2 party 'political system.'
Alas! Arkansas and Iowa are still stuck in decades old false narratives.

New Arkansas senator Tom Cotton who during his campaigns justified the Iraq war-in this day and age!

Here's what she actually said: "We don't know that there were weapons on the ground when we went in, however, I do have reason to believe there were weapons of mass destruction in Iraq. That was the intelligence that was operated on. I have reason to believe there was weapons of mass destruction. My husband served in Saudi Arabia as an Army Central Command sergeant major for a year and that's a hot-button topic in that area.


To my shock both states have mensa members. Social historians say the tipping point for societal change is between 10-15% segment of the population. If this section of the wider society can see through the smoke and mirrors and brainwashing,inevitably they influence their immediate circle;friends and family members who sway others to their side-this is the organic growth of genuine mass movements.
Crusades,independence struggles,religious reformations,mass protests, indeed all popular political human endeavours have this process at the germination stage-an awakening,an epiphany where reality intrudes and people suddenly see straight.
Early September a Gallup poll stated 60% of Americans have little trust in the media while barely 40% of post 911 military veterans believe the Iraq and Afghan invasions are worthwhile. The subsurface opinion shift is still underway and by November 2016 if the trend continues there may well be no Democrat/Republican Presidential contest as we know it.
Just don't tell Iowans or Arkansans.
Posted by mwaura kinuthia at 07:52 1 comment: