THE PSYCHOPATHOLOGY OF IMPERIALISM-WINSTON CHURCHILL

Winston Churchill was many things. In many ways he was a product of his aristocratic lineage and late 19th century England. Nearly half the world was coloured the pink of Pax Brittanica. As a young man he fought in Pakistan,S. Africa and Sudan.Arch imperialist,hero of the English speaking world,consummate politician,adroit military strategist and unparalleled weaver of word tapestries. That,at least is how he is known today and after all he did say,"history will be kind to me,for I intend to write it."

If only things were that simple;if only narratives adhered however loosely to historical fact. The narrative isn't straightforward bullshit-its not a bunch of people waking up one morning and deciding,"alright,these are the lies we're going to tell today." No,not by any means-its much more subtle and insidious;being the sum of casual nonrigorous assertions people  believe in  that validates their presence in the wider world. Eg,remember the WMD? Dubya,said he was invading Iraq because  Saddam was hiding them and the Mainstream Media all helped reinforce that particular narrative.The enduring power of the narrative is exemplified by the official 911 story. Over a decade later,with the 'hijackers,' having been seen alive and well throughout the Arab World after their supposed 'suicides',with 2 of the WTC buildings collapsing without any aircraft strikes people still believe the official version. Closer home in Kenya,people still  parrot the 'stolen elections,' mantra of 2007. However when proof of WHO exactly rigged and still lost is shown they uniformly change the subject or seek refuge in fake anger.
Back to the real Winston,enthusiastic warlord,destroyer of Dresden,druid,male rapist of younger cadets at Sandhurst Military Academy, he reveled in death and destruction. Not just 3rd world tribes,the Pathans,Iraqi Arabs and Kurds suffered his wrath but also his own lower classes. During the general strike of 1926 when miners went on strike protesting a mandatory 20% paycut he seriously suggested using machine guns on them.
As early as pre WW 1 when he was still a new MP his amorality was noticed. The Spectator on Churchill in 1911: "We cannot detect in his career any principles or even any constant outlook upon public affairs; his ear is always to the ground; he is the true demagogue." Lloyd George in this period compared Churchill to "a chauffeur who apparently is perfectly sane and drives with great skill for months, then suddenly takes you over a precipice."

I find proof of his druidism amusing. Obviously this move was to gain him access to the upper reaches of Society with their familiar practices of esoteric occultism and witchcraft-it must have worked. (The druids were the original priests of Neolithic Britain,those who built Stonehenge in either 2000 or 8000 bc. Did he know he was entering an ancient African religion? A post for another day.)
What is true is that as Britain's youngest ever First Sea Lord in WW 1 he unwisely pushed an amphibious landing in Turkey to relieve pressure on the Western Front. A total of 500,000 Brit,Aussie,New Zealand,French and Indian troops ultimately took part in the doomed battle of Gallipoli. Between the successful amphibious  landing in February 1915 and their evacuation in December they suffered 50% casualties-with nothing to show for the immense human cost. Today,Gallipoli remains a byword for military incompetence.

The constant unrelieved fighting over barren,featureless ground for little gain was so intense 7 VCs were awarded to the Aussie unit in one relatively minor engagement at Lone Pine Hill.

Just before WW 2 its known by many he was  in such serious debt he was in danger of losing the family home, Bleinheim Palace,seat of the Churchills for generations. Jewish banksters bailed him put on condition he destroys Germany. From unabashed admirer of Nazism he performed the somersault for which he was rightly famous.
He also practiced peculiar rituals,perhaps a vestige of his not so dormant Druidism.


Dennis Wheatley, Dion Fortune, Dr Alexander Cannon and Ian Fleming both claimed that Churchill had wartime dealings with Aleister Crowley, advertised as the world’s “wickedest man,” and the famous east end spirit medium Joe Benjamin, who was often advertised in the sixties as, Winston’s favourite medium.
Sefton Delmer the black propaganda and psyops leader, confirmed that 33rd degree masons Churchill and Aleister Crowley were involved in wartime sacrifices at the devils chimney on the south coast.

http://www.whale.to/c/winston_churchill7.html
Bengal suffered serious food shortages because mainly the Brits feared a Japanese invasion and implemented a scorched earth policy,destroying and confiscating all food stuffs. the available grain was all exported. By late 1943 an estimated 3.5 mn Bengalis had died one of the slowest most horrible deaths imaginable. Churchill,viewed Hindus as entirely expendable,a lesser species-typical of his ilk. He remarked openly, "I hate Indians. They are a beastly people with a beastly religion."

This was the result. But then again this is the man ,not the Germans,the most unfairly slandered people in history who instigated the deliberate bombing of civilians. His greatest war crimes involved the terror bombing of German cities that killed 600,000 civilians and left some 800,000 injured. Arthur Harris ("Bomber Harris"), the head of Bomber Command, stated "In Bomber Command we have always worked on the assumption that bombing anything in Germany is better than bombing nothing."
This is Dresden before the great RAF air raid in February 1945 that killed at least 300,000 Germans. 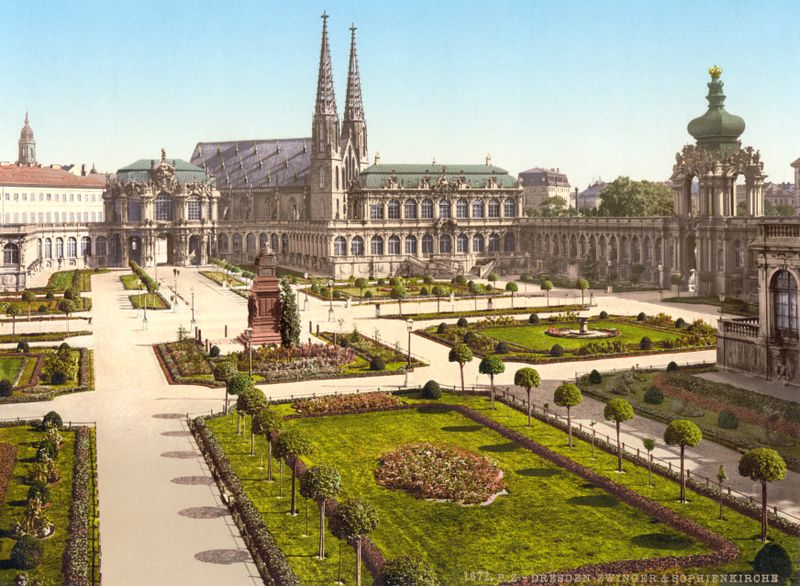 Dresden after 700,000 phosphorous bombs caused kilometer high flames leading to firestorms that sucked trees out the ground hurling them into the tornado of fire. 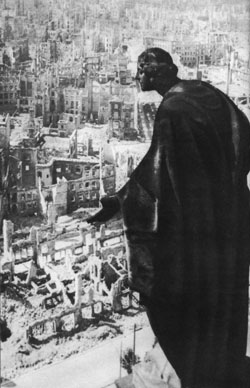 At this late stage the Nazis has already lost;in fact they were attempting peace talks by autumn 1943. Also the city had no military significance whatsoever as it was filled with refugees and civilian inhabitants. The true number of casualties can never be known. many were vaporised with thousands cooked in their clothes by the dry heat. As a final injustice many of the characteristically charred Dresden dead were misused by the Jews to later 'prove' their hysterical cremation allegations. The famous Khazarian chutzpah at work? Irony?

The Germans undoubtedly suffered the most from Churchill's pathology. After the war he supported their forced emigration from the lands they'd farmed for generations in East and West Prussia, Silesia, Pomerania, parts of Romania,the Ukraine,Russia and the Sudetenland, leading to a further 2 million German dead.
This then is a sketch of the man commonly referred to as one of the Greatest Ever Englishmen. Perhaps,his tendencies more suitable to an Attila the Hun,Kublai Khan are the biggest indicator of what Imperial Britain truly stood for behind the platitudes and patriotic praise singing? Could it be that its this uber racism,contempt for all commoners,love of self and complete amorality were the true reflection of his
Britain?

Before we answer, the question is-has anything truly changed? Is the old Britain gone for good?

Posted by mwaura kinuthia at 06:19