THE FEMALE FACTOR IN AFRICAN CONFLICT

Unknown to the 'experts,' the  media talking heads who pose as African authority on media outlets spouting cliched memes after every outbreak of ethnic hostility are some quite prosaic truths about the nature and causes of most of our inter ethnic hostility.
Sometimes African inter ethnic hostility isn't about water,cattle,land or group access to state assets in form of employment opportunities or tenders and contracts. Oftimes its access to desirable women and the  benefits both immediate (sexual gratification) and long term (emotional stability,good looking kids) accruing. The latter therefore find it in their interests to encourage ethnic competition which  serves thereby to increase the female market value.
To examine the idea look no further than this aspect of the Hutu/Tutsi thing. Unknown to many,but locals and African relief workers unencumbered by AngloJewish mindsets to conceptualise everything Tutsi women were and still are at the heart of much hostility in the entire Great Lakes.
Firstly on a strictly aesthetic level they're ideal mates. Tall,often 6 feet with swan necks large eyes,small waists and large hips. Ange Kagame,in her early 20s,daughter of mass murderer, Paul Kagame shows the Tutsi phenotype. Her dad is 6" 2',and she's wearing flats which makes her at the very least 6" 4'.

Tutsi women are thus highly coveted by both competing Hutu and Tutsi males not to mention male Belgians,Englishmen,Dutchmen,Russians,Arabs,Iranians,Indians,Lebanese,Irishmen,Australian  indeed any normal male human. In fact Rwanda and Burundi are favourite destinations of the UN and other international NGOs largely thanks to their presence. 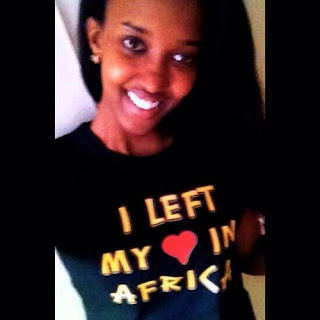 In fact well traveled Euro fathers inflicted with sons whose  dna is cursed with homoism have been known to fly them to Rwanda and Burundi in hopes that  Ms.Tutsi's overwhelming pulchritude may overwhelm their faulty dna programming at least temporarily and do what comes naturally.

Tutsi females long ago decided to help their males continue overlordship of the Hutu by a not so secret practice known throughout the region. They decided to ensure their offspring in mixed Hutu marriages were full Tutsi. How?? The only way possible. I first heard this on my maiden visit to Kigali in 2001 from both Hutu and Tutsi males. A Burundian Hutu woman mentioned how after every episode of periodic bloodletting the Tutsi wife would separate from her Hutu husband and chose the kids to take.
"Angelique and Patrice are mine,Jacqueline and Joseph are yours." Surrounded by her armed Tutsi kin the Hutu spouse would then realise  in the worst possible way  he'd lost out in the multigenerational war on the genetic level-he'd been cuckolded. Even today,serious Ugandan researchers who've spent years looking at the Tutsi/Hutu divide swear they don't mate with bantu and that's the inevitable fate of any Bantu male wifing a Tutsi.
In Kenya,the multiparty era of the 90s was kicked off with government sponsored 'land clashes,' pitting the Kalenjin against Kikuyu immigrants in the Rift valley. The Kalenjin warriors found it easy to attack their neighbours since much of the manufactured hostility stemmed  from their own females.
Many Kikuyus reported that often it was their own Kalenjin neighbours wives who incited their reluctant husbands,brothers and even sons to violence with simple envy. "Look how much money they're getting from their maize! They have ten acres while we have twenty! How can six grade cows build a stone house? We have over twenty cows!"These are condensed quotes from victims in Eldama Ravine and Molo.
Coupled with the Raila camp refusing to accept electoral defeat this envy was exacerbated by political tensions.. At the same time the more exposed and educated Kalenjin women openly prefer Kikuyu men,particularly in urban areas. A macabre pathology was noticed in the nature of the worst violence of January 2008.
The 'warriors' would slaughter male victims abominably but spare Kikuyu females after gang rape with the honest intention of marriage! There are published reports of many killers admitting as much.

At times women of an ethnicity serve as a lightning rod for displaced aggression among their menfolk. The best example can be seen among the Somali who landed in the liberal West after their collective national suicide in 1991.

Coming from a strict Islamic 4th world hellhole where mating decisions are made by parents and guardians to the relaxed  Angloworld is an unbelievable cultural shift:finding that blacks they've been acculturated
to despise as slaves,monkeys and subhumans(yes,there's a horrible racist element in Somali culture;in fact the local bantu are openly called jareer-meaning monkey) actually approach their women publicly-gasssspp!!
On their myriad of cyberspace media,(Somalis possibly have more websites and blogs than any other displaced ethnic group)  this topic often dominates-how to keep black Americans and black Englishmen away from xalimos (girls).
Take a look at any Somali website-topics like why do Somali girls date adoons (subhumans,usually reserved for blacks)/what do Somali girls see in Jamaicans?/why do the jareers chase our women so much ? predominate.
Anger,confusion and pain among both sexes are always evident in these discourses. For many such  dialogues are cathartic. It serves to externalise the normal stresses of life in a foreign land while indirectly declaring love for an intended all with guaranteed cyber anonymity.
Yes,Dear Reader,our females are intrinsically part of the process of overt and more subtle forms of inter ethnic competition directly and indirectly.

This traditional practice,unknown to the West is the real reason Hutus and Tutsis can never be friends. To my knowledge its the only culturally acceptable cuckolding I'm aware of. From ancient times Tutsis married to Hutu men were encouraged to 'strategically stray.' The practice  known as 'gapfuruba' is still practiced throughout the region and is an intrinsic weapon of the Tutsi arsenal.
I first heard of it on my first visit to Kigali in September 2001. An employee of IBUKA,a well funded NGO devoted to the official genocide narrative alluded to widespread belief in cuckolding of Hutu Husbands by Tutsis but didn't discuss it further-a brave man he still didn't want to tempt the gatekeepers of the Accepted History with contrary narratives and I couldn't press him further.
A Rwandese native expounds. His English isn't the best but still he's more or less clear.

oing back to the Hutu kingdom of midi 1000 AD and its scramble it was because Hutu men married to Tutsi women who were not for love but for connections and networking purposes. They had a mission to strengthen their existence and access power through backdoor. When Hutu kings had Tutsi women as their wives now the Hutu kingdoms were slowly falling into the leadership of the minority Tutsis who like nor love anybody else but themselves. The Hutus apocalypse was drawing closer. Later the Tutsi scheme was realized smoothly. Here is how it all worked well for the Tutsis to take over power in Rwanda and later found Hutus becoming salves for Tutsis for the next 400 years since around 16th Century to the 20th Century.


Usually, unknowingly to Hutus who were asleep then, when the king's wife was ovulating she usually could speak with her parents so that they organize one of her cousins to come and sleep with her. Tutsis are among few people who sleep with their immediate cousins in the region. Then during this time a wife would pretend that she is pregnant and ask for the husband a permission to go back to her parents so that her mother could take care of her during her morning sickness. In most of the cases Tutsi women married to Hutus could fake this morning sickness so that they get to go back home to their mothers and sleep with their cousins. This is what happened during the process that Tutsis called Ugupfubura.

“Ubwenge” is a form of education in which from childhood Rwandans, especially Tutsis are taught lying and misrepresentation:… For Tutsis, lying does not offend their moral concepts because, for them, it is a sign of nobility…”. Moreover, the Rwandans are taught to fool, to manipulate, to divert the attention of the curious so that they do not focus or find out what the Rwandans want to hide or lie about:

Over the past year Nairobi has seen an influx of Tutsi women in the higher end lounges and night clubs. The inevitable has happened. A senior cabinet member almost wept when his princess dumped him like a bad habit after he got her modelling contracts and citizenship. Those are typical examples off the net. You can't blame him! He was under the 'halo effect,' The halo effect is a cognitive bias in which an observer's overall impression of a person, company, brand, or product influences the observer's feelings and thoughts about that entity's character or properties.[1][2] It was named by psychologist Edward Thorndike in reference to a person being perceived as having a halo. Subsequent researchers have studied it in relation to attractiveness and its bearing on the judicial and educational systems.

I know of 2 locations in Nairobi,in Kayole and Kiambu road where their RPF has sent them to gather intel to assist in their Tutsi agenda-Kenya like the Great Lakes must fall!

Posted by mwaura kinuthia at 00:41